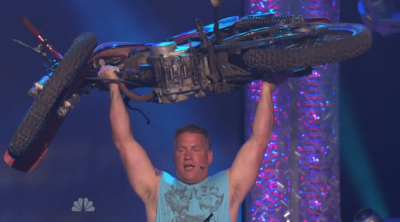 The Original “Strong Man” has performed hundreds of shows all over the US and Canada.

John Beatty has been seen by over 11,000,000 people on the 2010 season of America’s Got Talent (Season 5).  he is the only strong man performer to make the live finals in Hollywood.  John’s journey in the world of strength began as a 7th grader from a small town of Longview IL.  John wanted to be strong enough to garner a spot on his high school football team.  His father was and is an avid lifter – he taught John the proper form that helped him start strength training.  After high school, he became interested in strength sports and began competing in powerlifting in 1991.